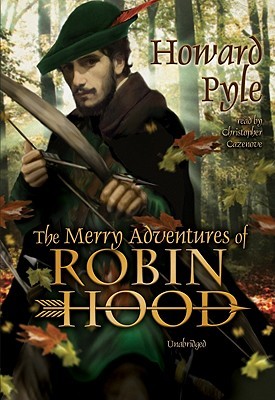 Read for: Mount TBR & Audio Book Challenge
Synopsis: "Here are the beloved adventures of the mischievous hero Robin Hood and his brave and merry band of outlaws, who forged a chivalrous code to protect the oppressed and despoil the oppressors. Follow along as Robin makes his breathtaking escapes from his archenemy, the Sheriff of Nottingham, while classic characters like Friar Tuck, Will Scarlet, and Little John create one hilarious escapade after another. Pageantry, knights, and beautiful maidens of old abound in the episodes comprising this favorite story."

My Review: I wasn't quite sure what to expect from this book, I am the first to admit, I am not familiar with Robin Hood beyond the animated Disney movie. I was rather surprised to find this written in an odd English style (not quite Old English or even really a translated English) and at times in what sounded like verse but not consistently (thank goodness I was listening to the audio book). It took me quite a while to get into this book, especially because I was only spending 15 minutes at a time listening but eventually some of the characters became familiar and bits and pieces of some of the stories as well. I do find Robin Hood and his whole band to be rather cunning con-men. Though I found myself missing the whole take from the rich to give to the poor fable, I didn't see a whole lot of give to the poor throughout this book, it was more of take from the rich to give the band a comfortable lazy life. Also this book was from Audible kids, and it is clearly not anything I can imagine a kid enjoying (at least under the age of 15). Anyway for me it was really an eh book, I am curious as to the original story though and if it would be any better.
My Rating: I must say that the narrator, Christopher Cazenove, did a really good job with all the voices.  Other than that and a couple of good chapters, this one was just one to get through for me. I give it a rating of Two Paws.