Review of 100 Cupboards by N.D. Wilson 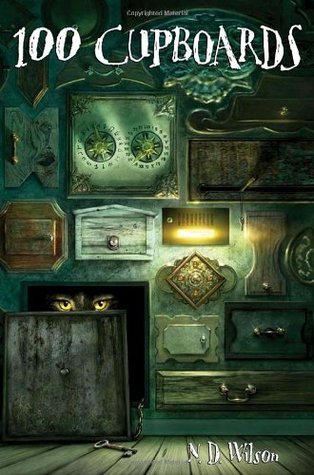 Synopsis: "Twelve-year-old Henry York is going to sleep one night when he hears a bump on the attic wall above his head. It's an unfamiliar house—Henry is staying with his aunt, uncle, and three cousins—so he tries to ignore it. But the next night he wakes up with bits of plaster in his hair. Two knobs have broken through the wall, and one of them is slowly turning...

Henry scrapes the plaster off the wall and discovers doors—ninety-nine cupboards of all different sizes and shapes. Through one he can hear the sound of falling rain. Through another he sees a glowing room—with a man strolling back and forth! Henry and his cousin Henrietta soon understand that these are not just cupboards. They are, in fact, portals to other worlds."

My Review: I had a little bit of an issue with this book, I almost put it as a DNF a few times but since I have the next two books in the series I pushed through to the end. And it was just that, I felt like I was pushing rocks up hill in six inches of mud. The concept of the story was very exciting and I was excited to see where the story led, but it really didn't lead much of anywhere. There was a brief bit of excitement for about 20 pages near the end but other than that it was very slow moving. I didn't really develop any connection with the characters, other than Blake the cat and potential Frank the Uncle, and almost couldn't care less what happened to them. I am hoping that all this slow build up leads to something exciting in the next book.
My Rating: I was so disappointed in this book, I really hope the next one picks up a little.  I can't give it more than One Paw and a Stump Wag.