Review of Dragons in the Clouds by David Blair 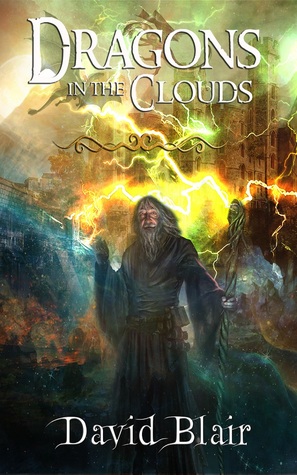 Read for: Requested Review/ Pump Up Your Book

Synopsis: "‘’Dragons in the Clouds’’ is a epic adventure that takes place during a time period when Dragons were alive and freely roamed the land. The people during this time were getting eaten by a vicious species of Dragon. The ruling King finally orders the total annilation of all living dragons. A powerful wizard, named Merlinus, who is a friend to the king, does not agree with the Kings order, for Merlinus knows all Dragons are not what they seem. So he does what he must to protect a family of Dragons that he had befriended. And to protect his Dragon friends, Melinus performs the spell of weightlessness and tells the Dragons to fly up and to hide in the cover of the Clouds. An unforeseen ability of the Dragons weightlessness spell is that a Dragons fire now looks like that of lightning and their roar is like that of thunder. Melinus tells the Dragons to live within the clouds and to only come down at night to eat. An apprentice to the wizard who has grandeur of his own has a plan for Dragons that he has hidden deep within a mountain cavern. Now enters a widowed mother, her young boy, who had also befriended a dragon, though a very young one. They suddenly find themselves caught between the Kings order and a battle that has begun between two species of Dragons. A battle that would determine control of the skies above the Kingdom of Albian. This Apprentice’s plan has consequences that may bring the Kingdom and perhaps the very world we live in today to an devastating end."

My Review: I was expecting a big epic fantasy but what I actually got was a novella length book, and I am not sorry. This is an interesting fantasy twist on the reason for thunder, lighting and various weather events. I really enjoyed the shorter length of this story, it is not often you find a fantasy with a shorter length that leaves you satisfied. The magic system is clear and developed and the characters are also developed. I do feel like there could be more to the story, there are hints at more with the characters of the fantasy world but I am still satisfied with what we are given. This is also a fairly easy fantasy to read, and could be enjoyed by audiences as young as 8-10 but it is still enjoyable for adults to read.

My Rating: I really enjoyed the bedtime story and folk tale feel to this story.  It contains classic fantasy elements that we all know and love but twists it a little as well.  I give it a rating of Three Paws and a Stump Wag.

I received a complimentary copy of this book from Pump Up Your Book promotions. The above is my honest review and opinion.

You can find out more about David Blair and his books on his Goodreads Page.

Dragons in the Clouds will be released November 16th but you can pre-order your copy in digital or print format now from Barnes & Noble or ask for it at your local bookstore.