Review of More Than Pizza by Christine DePetrillo 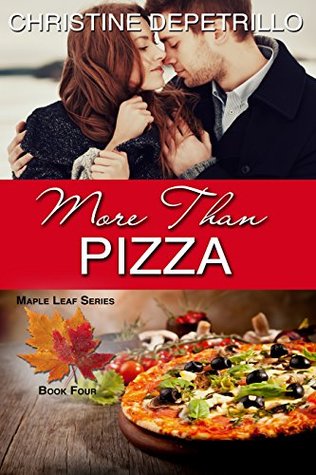 Detective Daxton Wilder only wants one thing—to see Boston mob boss Richard DiNoble behind bars. After spending time undercover in DiNoble’s organization, Dax is close to reaching his goal. Only DiNoble is a step ahead. When Dax wakes up, he has two bullet holes in him from the mob boss, and his twin brother, Harris, has dumped him at Liberty Hill Nursing Home. Pissed at the bucket of suck his life has become, Dax vows to get out of Liberty Hill as fast as he can.

Until his physical therapist walks in.

Shaylee Keene, Liberty Hill’s top physical therapist, can only charm men eighty and older. That much is clear. Her last boyfriend delivered the painful news that he wasn’t attracted to her anymore. Out of the blue. As if it had just occurred to him one morning that she no longer satisfied him. What if she couldn’t satisfy any man? What if she was destined to be alone forever? What if no one ever wanted her?

Now she has a new patient.

As Shaylee works with Dax and the pair tries to avoid DiNoble’s revenge, they find that nothing mends a broken body—and lonely hearts—like falling in love."


My Review: This book took an interesting step away from the previous books in the series. It could almost be the start of a branch off series instead of a continuation of the Maple Leaf series, you didn't really need to read the previous three books as only a couple of the sub-characters made an appearance in this one. With that said I enjoyed the new characters and settings that were presented in this book. I found Shaylee to be a very personable and relatable character as is Dax with his dedication to his job. This was a quick read that was perfect for a summer day on the beach or by the pool.
My Rating: This book wasn't exactly the direction I expected the series to take so that took me a bit to wrap my head around but once I got into the story it was quite the page turner.  I really enjoyed this book, much better than the previous book.  I give this one a rating of Four Paws.
Note: This book does contain some adult themes and scenes but if you prefer you can skim over them and it will not effect the story itself.