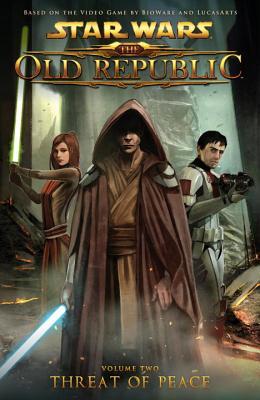 Read for: Graphic Novel Challenge
Synopsis: "A look at the era of "Star Wars: The Old Republic," written by one of the writers behind LucasArts and BioWare's massive multiplayer online game, "Threat of Peace" unveils a galaxy on the brink of destruction three hundred years after the events of "Knights of the Old Republic"!
For decades, the Galactic Republic and the Sith Empire have been at war. The Sith have gained control of the Outer Rim, but their efforts to penetrate the Core Worlds have so far been thwarted. Now, representatives from both sides attempt to negotiate a peace treaty--but deception by the Sith puts the Jedi in an unfortunate position.
Collects "Star Wars: The Old Republic" #1-#27, which appeared originally online at swtor.com.
Bonus behind-the-scenes content found nowhere else!
Written by Rob Chestney, one of the writers behind the game!
Critical events prior to LucasArts and BioWare's massive multiplayer online game!
Discover "more" of the newest "Star Wars" era!"

My Review: As much as I love Star Wars and the settings of this GN and even the art in this one, I am not impressed. This was a rather short GN but it definitely need to be longer. You are constantly jumping around to different storylines and nothing is really all that clear. You can get the main gist of what is going on but you know there is a lot more underlying plot lines that just aren't clear. I have the last volume in this set but am starting to think that these epic storylines are better off left in full length novels and movies.
My Rating: I love the vast variety of characters that can be created in the Star Wars world and the art work in this one is really good but the storyline is just too jumbled up. I give it a rating of One Paw and a Stump Wag.