After Dark Review of More Than Rum by Christine DePetrillo (Spoilers)

I have added After Dark Reviews to my blog as a way of notifying you of a review of a book with Adult themes and scenes. From now on I will keep my reviews of all books I read that have explicit scenes in them for late night posts for those of you who prefer to avoid them or easy to find for those of you who seek them out ;)
Before you read any further, there will be SPOILERS in this Review.  I was unable to fully express my opinion on this book without them.  So if you haven't read this book and plan to please stop here. 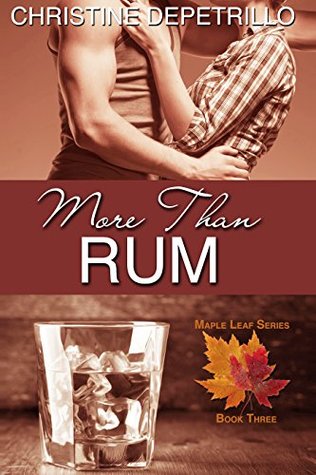 Web designer Hope Stannard has watched her cousin and her sister fall madly in love. She’s waited patiently for her turn to roll around, but her last boyfriend broke up with her via text message and the new guy she’s interested in disappeared on her for months with no explanation. Perhaps it’s time to throw in the towel, be content living with her Dalmatian puppy and her mother, and accept the official title of Unmarriable Old Maid.

Ex-Marine Adam Rouse fills his days with lumberjacking and building furniture. His nights are spent wide awake as he relives a raid in Afghanistan gone wrong. He emerged as the sole survivor, but questions why. Certainly other members of this team were more worthy of living than him. Deciding that bartending at night would be a better use of his time than battling insomnia, Adam applies at Black Wolf Tavern, the only place to hang out in small-town Danton, Vermont. He couldn’t drown his own troubles in rum, but maybe he can help others do so.

When Hope is attacked just outside the tavern, Adam comes to her aid, and the frosty winter temperatures can’t cool the heat that’s always been between them. Can Hope scale Adam’s fortress walls? Can Adam believe he is worthy of a woman like Hope? Will they rescue each other?"

SPOILERS BEGINNING HERE, STOP READING IF YOU DON'T WANT TO BE SPOILED.


My Review: I originally found this series at a local author event, and I have been really enjoying the series so far. The characters are always fun and quirky and even the sub-characters are fully developed. I did enjoy this book quite a bit but I have been having a little bit of an issue as to how Adam's PTSD was handled. I have no problem with a little fudging on timelines to fit things into the time of a book but I do have an issue with how his symptoms were nearly resolved with spending time with Hope especially considering the traumatic events that take place throughout this book. I am certainly no expert, nor a sufferer, but it seems to me that these events would be more of a trigger. Yes things did come up again at the end of the book but it really seemed like an after thought, like oh yeah he can't be suddenly better, let's make sure his symptoms do show at least a little. I don't know it doesn't really effect the enjoyment of the book but it really bugged me the way it was handled, to go from severe symptoms, to no symptoms and back to a few issues.
My Rating: I obviously had very strong opinions on how the PTSD aspect was handled in this book but besides that part of the story I still really enjoyed the book. I will also continue reading this series. I give this one a rating of Two Paws and a Stump Wag.﻿
Posted by Angela at 11:00 PM