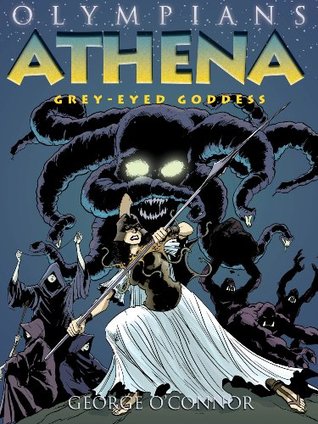 Greek Gods as you’ve never seen them before!

The strong, larger-than-life heroes of the Olympians can summon lightning, control the sea, turn invisible, or transform themselves into any animal they choose. Superheroes? No! Greek gods. The ancient pantheon comes to explosive life in this new series where myth meets comic books. Epic battles, daring quests, and terrible monsters await readers within the pages of these books.

Volume 2, Athena: Grey-Eyed Goddess, is the tale of the goddess of wisdom and war, recounting her many adventures."

My Review: I have always felt that Athena got the short end of the stick and this novel adds to that thought. It seems all of the myths that involve Athena are simply continuation of other Gods or the beginning of some other hero's story. I do like how this volume depicted so much of her strength, though I would like to have seen a little more of the wisdom of her legend. As I found with the previous volume in the series, I love the short info pages/ character pages at the end of the novel that give you a little more information on the major players.
My Rating: I wasn't as impressed with this installment of the Olympians, but I think that is more because of the myths surrounding Athena than it is due to the writing.  I give it a rating of Two Paws and a Stump Wag.