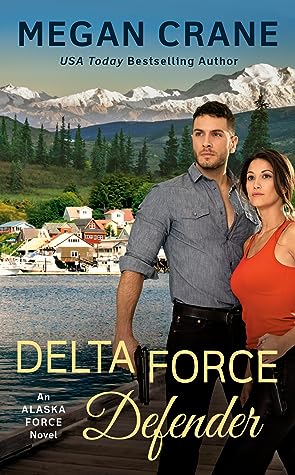 After an explosion that should have killed her, Caradine Scott barely escaped her criminal family by leaving her old identity behind her. These days she runs the Water's Edge Café in a rugged little town on the edge of nowhere, vowing never to let anyone close to her again.


Isaac Gentry is back home after his career in the military, playing the part of an unassuming local in Grizzly Harbor, while also overseeing Alaska Force's special ops work as the leader and commanding officer he was in the Marines and beyond. He has better things to do than obsess over a woman who claims she hates him, but every glimpse he gets of the vulnerability beneath her prickly exterior is a distraction...and a challenge he can't ignore.


When Caradine's demons catch up with her, her café isn't the only thing that blows up. Her past pushes them together, and closer to a future that's been waiting for them all this time. They just have to survive long enough to enjoy it."

My Review:  We finally get to dive into the relationship between Isaac and Caradine that has been hinted at throughout the previous four books in the series. Unfortunately I really struggled with this book. The push and pull between the characters and the griping between the two of them just felt off and forced to me. I was excited to read more about Caradine, I loved her tough, take no BS personality, but in this book her mood/personality swings kept pulling me out of the story (not to mention the not so smart stunts she kept pulling). I did like the more suspenseful focus throughout the story; a little more action and a lot more who's behind it all. I will still continue the series, because like I said before, I really enjoy the whole group of Alaska Force characters.

My Rating: For all the build up to this couple throughout the series, I really struggled to get into this one and to follow their characters.  I understand the reasoning behind their different behaviors but at the same time it really threw me out of the story.  I give it a rating of Two Paws.

I received a complimentary copy of this book via Netgalley. The following is my honest review and opinion.

You can find out more about Megan Crane and her books on her Goodreads Page or Website.

Delta Force Defender just released on July 7th so you can now obtain your own copy of it and the previous books in print or digital format from Amazon or Barnes & Noble or request it at your local bookstore or library.
Posted by Angela at 10:00 PM