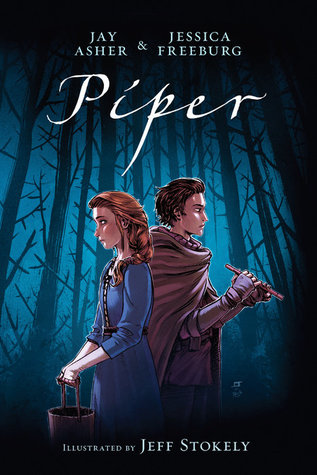 Synopsis: "Long ago, in a small village in the middle of a deep, dark forest, there lived a lonely, deaf girl named Maggie. Shunned by her village because of her disability, her only comfort comes from her vivid imagination. Maggie has a gift for inventing stories and dreams of one day finding her fairy-tale love.

When Maggie meets the mysterious Piper, it seems that all her wishes are coming true. Spellbound, Maggie falls hard for him and plunges headfirst into his magical world. But as she grows closer to the Piper, Maggie discovers that he has a dark side.

The boy of Maggie's dreams might just turn out to be her worst nightmare..."
My Review:  I really enjoy re-telling stories and haven't seen many Pied Piper stories (and I haven't read any of them), so I was really excited to be given the opportunity to read this one. I wasn't sure what to expect but it is beyond what I would have imagined. The artwork in this graphic novel is beautiful and the style really suits the story. This format also really suits the story, the folk tale/fairy tale of the Pied Piper is a short one and there is a lot of holes that need to be filled in but with all of that it is still short, so this format really stretched the story a bit more and also filled in the holes without loosing the traditional feel. The way this re-telling is written it presents a lot of questions as to what is right and what is wrong, and all that grey area in between. It is also has a great message about judging those around you. I can see this being a book used in schools to spur some interesting discussions.

My Review: I really enjoyed this book, the writing and illustrating styles meshed well with each other and the story. I also like how it is dark yet it doesn't go so dark that it won't appeal to everyone.  I give it a rating of Four Paws!

Jay Asher's debut novel, Thirteen Reasons Why, has regularly appeared on the New York Times bestsellers list during its first decade in print, selling over 2.5 million copies in the United States alone. The Future of Us, his second novel, was co-authored with Printz Honor winner Carolyn Mackler. His third novel, What Light, will be released in October 2016. His novels have been translated into thirty-seven languages. He lives with his family in a California. Follow him @jayasherguy.

Jessica Freeburg is the author of paranormal fiction (Living in Shadows) and narrative nonfiction works focused on creepy legends and dark moments in history including Monsters of the Midwest, Fight for Survival, and Collapse and Chaos. To blend her love of writing with her passion for history and the paranormal, Jessica founded Ghost Stories Ink, a group of authors, illustrators, and filmmakers who visit historic locations and perform paranormal investigations for creative inspiration. She also serves as the assistant regional advisor for the Minnesota Society of Children's Book Writers and Illustrators. Follow her @JessicaFreeburg. 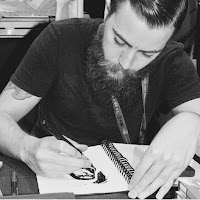 Jeff Stokely is the co-creator and artist of Eisner-nominated comic series The Spire. He is the artist of acclaimed series Six-Gun Gorilla and Jim Henson's The Storyteller: Witches, The Reason For Dragons.