Graphic Novel Review of Huntress: Crossbow at the Crossroads by Paul Levitz 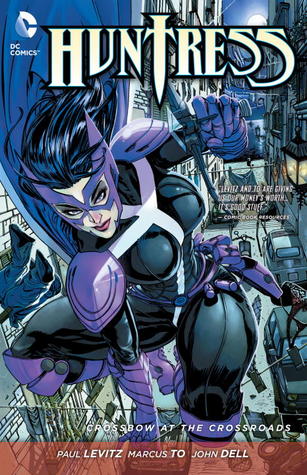 Synopsis: "As the last survivor of a crime family eliminated by bloody rivalries among the mobs of Gotham City, the orphaned Helena Bertinelli grew into the mysterious vigilante known as the Huntress. Huntress creator, Paul Levitz, returns in this action packed journey through the bowels of Italy's most deadly crime syndicates. Huntress sets out to uncover and destroy a deadly human trafficking and gun-smuggling operation that extends to the highest reaches of the government."My Review: So this one looked intriguing and I thought it may have been a stand alone since it wasn't numbered, well clearly there is more to the story. If I hadn't read the synopsis I wouldn't have known who the Huntress was, how she came to be or what exactly she was trying to do. This one felt very incomplete even the story itself, there are scenes and characters that jump around a lot and it really isn't clear what is going on. I do like the premise of it though, a woman saving other woman from human trafficking, it just could have been executed better.

My Rating: I wasn't as thrilled with this one as I had hoped, it seems to really be a trend even for non main stream super heroes to have incomplete stories that you really have to hunt for.  I give it a rating of Two Paws.