Can you believe this book is still being challenged, even as recent as 2007?! Again the irony of censoring books about censoring books. Some high schools have even used redacted copies for classes.  Some of the reasons it has been challenged include vulgar or obscene language, the burning of the Bible and depictions of Christians and firemen. Again people need to understand that this is a work of fiction, and the point of it was more about a way of life we are being sucked into which sets human interaction and books aside in favor of computers, televisions and instant gratification. 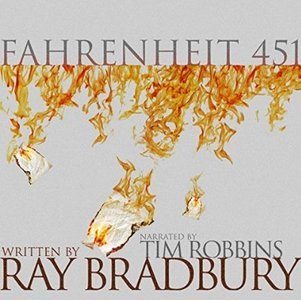 Guy Montag is a fireman. In his world, where television rules and literature is on the brink of extinction, firemen start fires rather than put them out. His job is to destroy the most illegal of commodities, the printed book, along with the houses in which they are hidden. Montag never questions the destruction and ruin his actions produce, returning each day to his bland life and wife, Mildred, who spends all day with her television "family". But then he meets an eccentric young neighbor, Clarisse, who introduces him to a past where people didn't live in fear and to a present where one sees the world through the ideas in books instead of the mindless chatter of television. When Mildred attempts suicide and Clarisse suddenly disappears, Montag begins to question everything he has ever known. He starts hiding books in his home, and when his pilfering is discovered, the fireman has to run for his life."

My Review: This is yet another book that has been on my TBR list for quite some time and it was about time I read it. I don't know why I took so long to read it. This book was actually a surprisingly short, easy and enjoyable read. I did have a little bit of difficulty imagining the setting, but I have never done well with futuristic sci-fi settings. I did however find the characters to be relatable and quickly became very attached to them. I absolutely adored Clarisse and while she played a major part in Guy's awakening, she was a minor character who I would have loved to see more. This was a fascinating read, one that you can find similarities with the way of life in the book and in current times, it is almost a little eerie and foreboding. Definitely a great book that everyone should read.
My Rating: I really enjoyed this book, more than I expected I would. I did become rather attached to Clarisse and even though we spent little time with her. I give this book a rating of Four Paws!
﻿
Posted by Angela at 11:00 AM