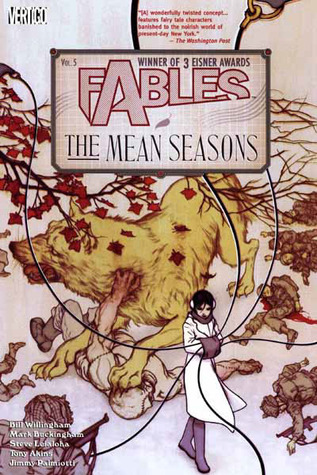 Read for: Graphic Novel Review
Synopsis: "Collecting issues 22 and 28-33 of the hit VERTIGO series, this trade paperback features two tales of Bigby's exploits during World War II as well as "The Year After," which follows the aftermath of the Adversary's attempt to conquer Fabletown -- including the birth of Snow White and Bigby's children!"

My Review: This volume felt a little disconnected through out and from the series. The art style was also way different, I almost didn't recognize some of the characters because they were so different. This one also seemed to veer away from the touches of fairy tales, at least common ones most people are familiar with, so that was a little disappointment for me too. I did find the war stories for Bigby to be interesting but really a tangent that didn't need to be there, it didn't really add to the main storyline at all. All in all it was just an eh for me.
My Rating: This is definitely one of those series that I am in and out of, sometimes I love it, sometimes I hate it. I give this one a rating of Three Paws.