Mystery Monday: The Whole Cat and Caboodle by Sofie Ryan

For today my first Mystery Monday I have a review of the first book in a series that has piqued my interest. 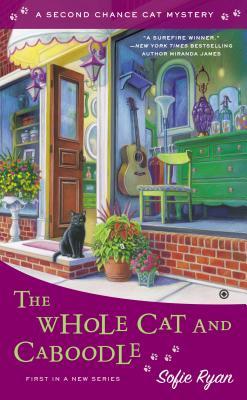 Read for: Borrowed Book/ Audio Book
Synopsis: "Sarah Grayson is the happy proprietor of Second Chance, a charming shop in the oceanfront town of North Harbor, Maine. At the shop, she sells used items that she has lovingly refurbished and repurposed. But her favorite pet project so far has been adopting a stray cat she names Elvis.
Elvis has seen nine lives—and then some. The big black cat with a scar across his nose turned up at a local bar when the band was playing the King of Rock and Roll’s music and hopped in Sarah’s truck. Since then, he’s been her constant companion and the furry favorite of everyone who comes into the store.
But when Sarah’s elderly friend Maddie is found with the body of a dead man in her garden, the kindly old lady becomes the prime suspect in the murder. Even Sarah’s old high school flame, investigator Nick Elliot, seems convinced that Maddie was up to no good. So it’s up to Sarah and Elvis to clear her friend’s name and make sure the real murderer doesn’t get a second chance."
My Review: I have been wanting to try a new cozy mystery series and I had to pick this series up because of the cat, Elvis. I was kind of thinking Second Chance Cat meant it revolved around an animal rescue or something, but it ended up revolving around second hand/upcycle store. That was a bit of a surprise but at least we still get Elvis, the rough and tumble cat who has claimed his people and smarter than the average cat. I like how in this book, it isn't the main character who is spearheading the amateur investigation but is dragged into it reluctantly. This mystery had quite the interesting cast of characters, the elderly crowd was so entertaining and quirky, the side story of the younger generation trying to keep the older generation out of trouble was so entertaining. With the mystery itself, there were some pretty good twists throughout, we are definitely guided down a specific path to a suspect but as always small details throughout the story add up to the conclusion. I will definitely be trying more books in this series and hopefully more time in this small town will draw me in more.
My Rating: There were certainly some interesting characters, a great cozy companion and a nice small town atmosphere, all things I love in a book. So while it wasn't quite as I expected, that is my own fault for not reading the synopsis and just jumping to a conclusion. While I am not 100% hooked on this one, I am definitely willing to give the next book a shot, the good thing is if I do get hooked, there are only 7 books in the series so far, not too daunting of a backlist but also enough to keep me occupied for a while.  I give this one a rating of Three Paws and a Stump Wag.