Arrg-ust Review of The Pirate by Harold Schechter 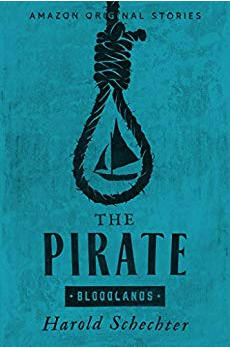 Synopsis: "In 1860, a sloop drifted into New York Harbor. Not a soul on board—just blood from cabin to deck. Looted coins led to Bowery thug Albert Hicks, the ax slayer who turned his shipmates into chum.
His crimes were absolutely fiendish. His execution was pure ballyhoo. It drew nearly ten thousand bloodthirsty sightseers to the city—including the enterprising showman P. T. Barnum. Refreshments were served as the most notorious and unrepentant mass murderer of the era made history as one of America’s first celebrity killers.
The Pirate is part of Bloodlands, a chilling collection of short page-turning historical narratives from bestselling true-crime master Harold Schechter. Spanning a century in our nation’s murderous past, Schechter resurrects nearly forgotten tales of madmen and thrill-killers that dominated the most sensational headlines of their day."

My Review: I picked this book up because I was looking for a slightly different Pirate book as opposed to fantasy and romance. I also found it interesting that it was a historical book and a short listen. While it is a historical non-fiction book about a murder and the subsequent hunt, trial and execution. Based on the synopsis I was expecting a pretty bone chilling story, something that maybe shouldn't be read alone at night; unfortunately that didn't end up being the case. Instead of dramatizing it a little or at least elaborating a little, it really was a statement of facts. I have read a few true crime books in the past and have found them a lot more interesting, this seemed like something you would find on a reference site, brief and bare bones facts. I think the narrator also added to this with a monotone reading of the story with a nearly complete lack of emotion or reaction to what he was reading. It was still an intriguing story but just a little too lackluster for me.

My Rating: I was really expecting to be terrified after this book, especially listening to it on audio book but it was very short and to the point, almost like an encyclopedia entry.  I guess it would be great if you like true crime and just the facts but it really wasn't what I expected.  I give it a rating of Two Paws.