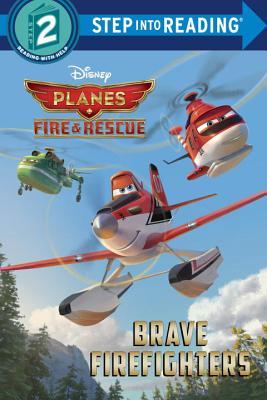 Read for: Early Reader Challenge
Synopsis: "Planes: Fire & Rescue features a quirky crew of elite firefighting aircraft devoted to protecting historic Piston Peak National Park from raging wildfire. When world famous air racer Dusty learns that his engine is damaged and he may never race again, he must shift gears and is launched into the world of wildfire air attack. Dusty joins forces with veteran fire and rescue helicopter Blade Ranger and his courageous air attack team, including spirited super scooper Lil' Dipper, heavy-lift helicopter Windlifter, ex-military transport Cabbie, and a lively bunch of brave all-terrain vehicles known as the Smokejumpers. Together, the fearless team battles a massive wildfire, and Dusty learns what it takes to become a true hero. Boys and girls ages 4 to 6 will fly into reading with this Step 2 Step into Reading leveled reader based on the film!"

My Review: Munchkin enjoyed the Planes movie and also loves firefighters, we haven't seen the Fire & Rescue movie though. The story was a little choppy. It would have been good for it to be in the story how the planes drop water on the fires as that wasn't clear. This is a level two book so the sentences were more complex with more text on each page but the words were still simple for young readers to either sight read or sound out.
My Rating: This one was okay, it focused so much on Dusty that you didn't learn much about how they actual fight the fires. It will still capture those young readers and fans. We give it a rating of Three Paws.