Review of Daughter of Earth and Sky by Kaitlin Bevis 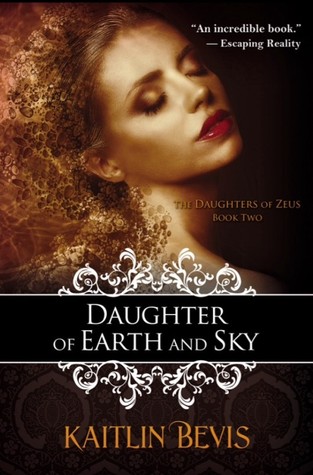 Read for: NetGalley/ Requested Review
Synopsis: "Some vows can never be broken, especially with you've recently found out you’re a goddess.

In the flick of a eyelash Persephone has gone from being a high school junior in Athens, Georgia to the wife of Hades, god of the Underworld. Under his platonic protection, she’s waiting for springtime, when Boreas, the sinister god of winter, will stop stalking her.

But even Hades can’t keep Boreas and his minions from threatening her. Finally she escaped back to the world of the living. Maybe she can just go back to normal—and forget that she’s fallen in love with Hades.


Thanatos—a friend from the Underworld, has betrayed her. Persephone can't tell anyone about Thanatos' betrayal, and it drives a wedge between her and Hades.

And then there’s Aphrodite, the gorgeous goddess who was born among the ocean waves with more charm than she can control. Persephone’s dearest ally, Melissa, is furious and jealous when Aphrodite starts winning Persephone’s friendship. Persephone turns to a human boy for friendship. But will their relationship put him in danger?

Persephone must choose between her human life and her responsibilities as a goddess. If she doesn't, she could lose that life and Hades, too.

But either way, she may not survive her father’s schemes. After all, she’s Zeus’s daughter."


My Review: This was a book received through Netgalley in exchange for an honest review. After reading the first book in this series I was a little curious where Bevis would take it. I enjoyed some of the new twists thrown into the tradition myths, ie. how Aphrodite came to be and be so disliked by the other gods and goddesses. I did find this book a little bit slow, not a whole lot happens and most of the book Persephone is confused. I still found Persephone to be a little immature but she did start to develop and learn. I enjoyed the tradition of gods and goddesses not being able to like and having to keep promises in work throughout the book. I did feel like the conclusion was a little predictable with all the very clear hits that were dropped throughout the book, and while it is a cliffhanger ending it didn't force me to grab the next book (it will happen just not immediately).
My Review: For some reason I found myself setting this book aside for others, I don't know if it was the pacing or if it just wasn't in the mood for this style of book. It was still an enjoyable read, just not as much as the first book.  I give it a rating of Three Paws.