Review of Not Just Spirited by Chynna T. Laird 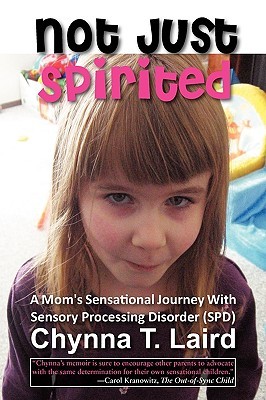 Synopsis: "What would you do if your child suffered with something so severe it affected every aspect of her life?
And what if your cries for help fell on deaf ears at every turn? You'd follow your gut and fight until someone listened. And that's what Chynna Laird did. When she was just three months old, Jaimie's reactions to people and situations seemed odd. She refused any form of touch, she gagged at smells, she was clutzy and threw herself around and spent most of her day screaming with her hands over her ears and eyes.
By the time she turned two, Jaimie was so fearful of her world they spent most days inside. What was wrong with Chynna's miracle girl? Why wouldn't anyone help her figure it out? Jaimie wasn't "just spirited" as her physician suggested nor did she lack discipline at home. When Jaimie was diagnosed with Sensory Processing Disorder (SPD) at two-and-a-half, Chynna thought she had "the answer," but that was just the start of a three-year quest for the right treatments to bring the Jaimie she loved so much out for others to see. With the right diagnosis and treatment suited to Jaimie, this family finally felt hope. Not Just Spirited is one mother's journey to finding peace for her daughter, Jaimie. As Chynna says often, "Knowledge breeds understanding. And that's so powerful."
Parents and Therapists Praise "Not Just Spirited"
"Chynna's memoir is sure to encourage other parents to advocate with the same determination for their own sensational children."

My Review: Definitely a heart wrenching book to read, you can help but feel the heartache, frustration, sadness, and helplessness Chynna and Steve faced. I did like seeing that occasionally progress was made, even though a few steps were taken back and sometimes having to start from square one again the did finally find a way for things to start fitting together. The book itself at times was difficult to read because it sounded like a pamphlet you get in a doctors office with a lot of information and clinical terms shoved at you all at once, but I understand that she was trying to get the message out but maybe allowing people to do some of their own research would have worked better than forcing information into the book. That said it is still a book of almost unbelievable triumphs and the resilience of loving parents.
My Rating: While the book was very informative and you got a real feel for the struggle Jaimie's parents went through to get her the help she needed, it was just a lot of information shoved into every crevice of the book. I give it a rating of Two Paws and a Stump Wag.